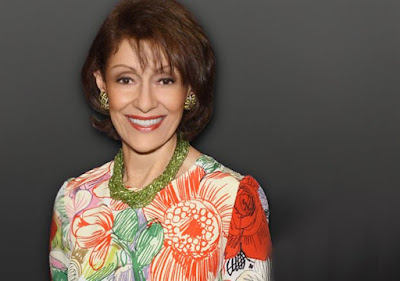 My heart was heavy yesterday, when I opened the N.Y. Times and read about Evelyn H. Lauder's passing. Evelyn H. Lauder, a refugee of Nazi-occupied Europe who married into the Estee Lauder cosmetics dynasty, died on Saturday at her home in Manhattan, at age 75.

I knew that she had been ill with cancer in the last few years, but did not know her recurrence was due to ovarian cancer, instead of breast cancer.  As a genetic breast cancer survivor (knock wood, spit spit), and fundraiser, I have long looked up to her as an inspiring example of a life well lived after diagnosis, both personally and professionally. She struck me as an unstoppable optimist.

"The cause was nongenetic ovarian cancer, said Alexandra Trower, a spokeswoman for the Estée Lauder Companies". In 2007 she received a diagnosis of ovarian cancer, which developed independently of her breast cancer, Ms. Trower said.

This is the first time I have ever heard the use of the term "nongenetic" used to emphasize that she was not a BrCa 1 or 2 mutation carrier, which puts you at significantly higher risk than the general population, of being diagnosed with ovarian cancer.  A common recommendation for BrCa 1 or 2 carriers, is removal of the ovaries and fallopian tubes after childbearing (particularly if a breast cancer diagnosis is involved).

"Mrs. Lauder learned she had breast cancer in 1989 and soon became a strong voice on behalf of women’s health, though she was always reluctant to discuss her own condition. “My situation doesn’t really matter,” she told a reporter in 1995".

"She was a creator of the Pink Ribbon campaign, a worldwide symbol of breast health, and in 1993 she founded the Breast Cancer Research Foundation, which has raised more than $350 million".

"Another major accomplishment by Mrs. Lauder was the establishment of the Evelyn H. Lauder Breast Center at Memorial Sloan-Kettering Cancer Center in New York City. This Center, completed in 1992, incorporated diagnostic and treatment services into one center together, something which had not been done previously and has now been emulated in multiple other centers worldwide".

It is my belief that there are other breast and ovarian genetic mutations out there, that remain for now, undiscovered.  Evelyn Lauder knew the key to preventing and curing breast and ovarian cancer lies in the hands of the brilliant doctors the Breast Cancer Research Foundation supports.

She is survived by her husband Leonard, two sons and five grandchildren, and with hope, future generations of women.