I am going to cut my self some slack... Nothing I could write could possibly due justice, or properly describe the extraordinary assemblege of clothing that comprise the Daphne Guiness Exhibit at the Fashion Institute of Technology in N.Y. (through January 7th).  I still can't certain ensembles out of my mind.

Daphne Guiness was named to the International Best Dressed Hall of Fame in 1994. I don't know how she escaped my radar until my two visits to the Alexander McQueen exhibit this summer at the Met...that is a heady honor that is not bestowed lightly.

Daphne, now 43, is a Guiness, an heir to the Guiness Brewery by birth and the Granddaughter of Nancy Mitford famed British author, the eldest of the 6 notorious "Mitford Sisters".  At 19 she married Spyros Niarchos, (son of billionaire shipping magnate Stavros Niarchos) and bore 3 children.  They divorced in 1999. She is also stunningly beautiful.


She collected Alexander McQueen's clothes when was designing for Givenchy.  Once they met, they developed a deep friendship. Daphne embraced his dark aesthetic and accomplished tailoring, sometimes acting as muse, for his own collection.

The exhibit includes many of McQueen's designs, in addition to Karl Lagerfeld for Chanel, Azzedine Alaia, Valentino, Christian LaCroix, Dior and her own designs. Some are GaGa before Gaga, in terms of their theatricality, others are stunningly pure.

Valerie Steele, director and chief curator of the F.I.T. museum, worked for two years with her subject, who turned out to have kept her enormous collection — from a Gareth Pugh catsuit studded with nails, ( which I assumed she wore this strictly for cocktails),  to lush Oriental wraps — on a computer database.

“Daphne is more than a clothes horse, and she is not just an accumulator,” Ms. Steele says. “She is building a fashion collection, then she takes that to create her own persona. The first time I met her, I asked her if she would do an exhibition. I think she is one of the most fascinating fashion icons in the world today.”

In brief, the exhibit is broken down into six segments, each devoted to a different aspect of Daphne's personal style; 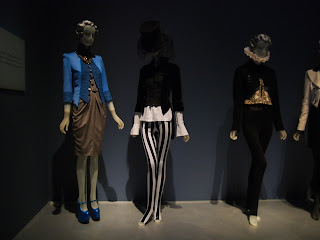 Armor- features clothing that alludes to Daphne's love of armor.  "I think it's very beautiful to be able to cover yourself in metal.  I love the color and the way it reflects. But it is also protective".

Chic- Perfectly simple little black, white and grey dresses and suits. "Classically elegant, they reflect the influence of her mother and grandmother".  My favorite Daphne quote??? "I don't do event dressing, because everyday is an event". 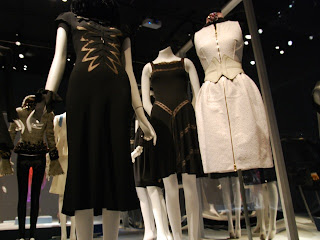 Evening Chic- continues the theme of classical elegance as interpreted by Daphne. "I like structure", she says, "with a little bit of chaos".

Exoticism- refers to Daphne's penchent for satorial drama. "Fashion today is becoming more beige. We should be flying the flag for individuality". 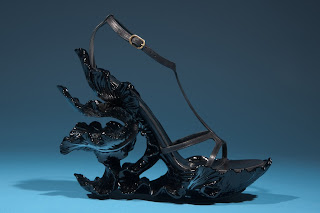 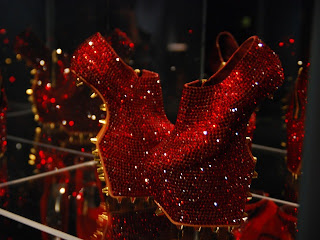 Sparkle-evokes Daphne's words, "I'm like a magpie- I love anything that sparkles"!  It also alludes to her love of plumes.  Valentino always teases her that he can tell where she's been, "because of the trails of feathers and beads".
This is my idea of heaven!

Many of the more incredible looks were not available in photos, including her amazingly beautiful accessories.  I implore you too see this exhibition, if you are in the N.Y. area and are someone who loves fashion.