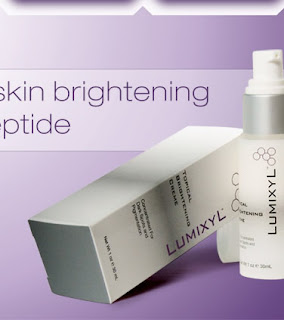 One of the unexpected displeasure's that sometimes result from professional attempts to remove ages spots is "post-inflammatory hyperpigmentation".  What exactly does this mean???  In a nutshell, your treatment backfired and your worse off than when you started....big SIGH.  Ya.  That's what happened to me.

I attempted to remove three small age spots from my cheek with Liquid Nitrogen at my Dermatologists office.  I had done it once before, about five years and presto, 6 days later, clean and clear.  This time, I was not so lucky.

When I received a 4 part brightening system from Lumixyl,  I started using it that night.  The only thing I had to lose were my spots...which, by the way, I was plenty cranky about.


Here's how Lumixyl is described:

"Lumixyl™ is a revolutionary peptide technology developed by researchers at Stanford University (I like the big guns) to improve the appearance of hyperpigmentation, including:
Preliminary clinical results are being evaluated in large confirmatory trials and demonstrate that topical use of Lumixyl™ visibly improves mild to moderate hyperpigmentation with excellent volunteer satisfaction in as little as 8 weeks".

In addition to its efficacy, Lumixyl™ is the only skin brightener to offer all of the following benefits in a single product:

Lumixyl is an easy to use four part system, that requires a pea size amount of product for each application.  For the last two months each night after cleansing, I used a small amount of Topical Brightening System ($120) on my spots. I did not care for  Lumixyl's Active Prep Gentle Foaming Cleanser ($58) and did not continue using it after the first night. Lumixyl can be used with other anti-aging products, that include retinoids and salicylic acids (phew).

In the morning, I apply GlycoPeel 20 Rapid Exfoliation Lotion ($60), which stings for about a half a second, due to the high concentration of glycolic acid, followed by Moisturize Lock Sunscreen SPF 30 ($58).  Moisture Lock Sunscreen has a luxurious texture and like many sunscreen products, a slight glimmering white sheen due to the primary ingredient titanium-dioxide.  I usually look to avoid this spf pitfall, but in the case of my "post-inflammatory hyperpigmentation", it actually was a plus, temporarily lightening the areas, prior to concealer(s).

After 8 weeks of use (optimal results at 16), I am nearly spotless and I will continue using Lumixyl until they are completely gone.  The absolute KEY to maintaining results, is the prodigious use of sunscreen or very quickly you will be back to spot one.

Here are my thoughts:  If you have a cleanser and sunblock with SPF 30 or higher that you are satisfied with, stick with them and save your money on these two.  The work horses are the Skin Brightener and Rapid Exfoliation Lotion.  Together at $180, it is not cheap or toxic, but is extremely effective and a little goes a long way.

So my lovelies, has P-I H ever happened to you? Does a non-toxic skin lightener and brightener appeal to you and are you willing to pay a premium for it?  Let me know!