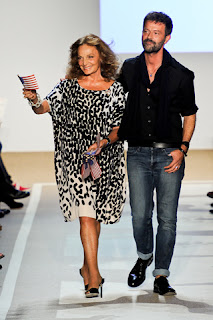 DVF, the Empress of fashion always shows on the Sunday of Mercedes-Benz Fashion Week, and always at 4:00 P.M...give or take.

If a runway show could be considered a party, this would be it.
DVF and her husband Barry Diller have a long reach, so you can always expect to see captains of industry, sitting side by side with Celebs and the biggest names in Fashion.  It's a hoot and I am not nearly jaded enough to ever be bored...next time I'm packing opera glasses...

This was the perfect show to watch from my perch as Peter and Linda Levy's guest, in the Amex SkyBox at Lincoln Center.  This year, renowned designer Bill Sofield created a lounge that managed to be both intimate and lavish.  Platinum and Gold Cardmembers, have the opportunity to purchase packages which allows them private access to the Amex Skybox where they can sip champagne and cocktails while watching their favorite designer fashion show. Afterwards, the designer or other fashion luminaries are interviewed and guests have a chance to mingle with them...I guess membership (still ) does have its privileges!

Our host was the gorgeous Gigi Stone,  the highly regarded Financial Reporter at Bloomberg News, who also knows her Madoff's from her Malandrino's...Gigi used to do fashion reporting for NY1.  The lounge was filled with what looked to me like a gaggle of Gals from Dallas. I imagined  them flying in on one of their G-5's, perfectly dressed to hit the shows and power shop.  They couldn't have been lovelier or any less excited to be there...my kind of Girls!

In keeping with the theme of  "beginnings", the show opened with an all white segment and Nina Simone singing, "its a new dawn....and I'm feeling good".  It was the perfect spark of hope and optimism for a day that also marked the 10th anniversary of 9/11.  Icing on the cake???  It was a fabulous show.

Here are some of the looks I liked that captured the trends of show. I also adored the slightly mussed chignon's the models wore, styled by the spectacular Orlando Pita: 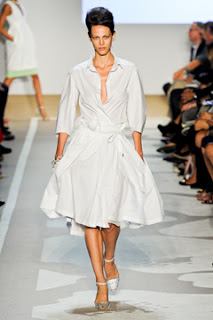 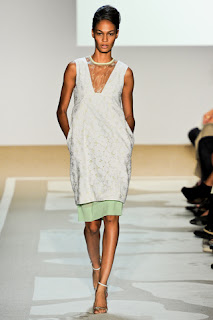 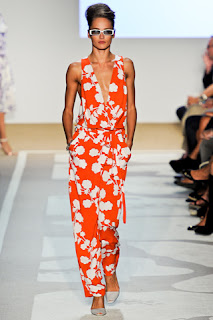 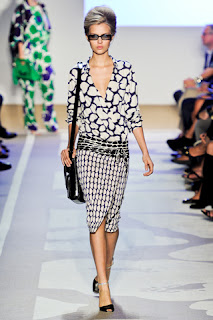 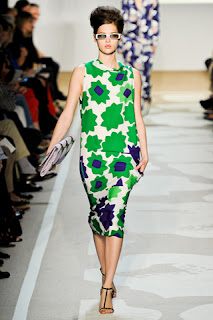 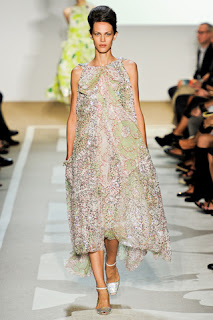 The clothes looked richer, luxe and a little more grown up than most DVF Collections.