Nothing can really prepare you for the savage beauty of Savage Beauty.

This extraordinary retrospective of Alexander McQueen's unique, avant-garde genius on exhibit at the Metropolitan Museum's Costume Institute left me breathless.   Brilliantly curated by Andrew Bolten and Harold Koda, this exhibit of 100 ensembles and 70 accessories, is broken down into six themes that pervaded McQueen's work and mind; death and lightness, predator and prey, man and machine and always nature...
McQueen, who committed suicide shortly before his 40th Birthday,  in February of 2010 was especially inspired by the Victorian Gothic. “There’s something . . . kind of Edgar Allan Poe, kind of deep and kind of melancholic about my collections,” McQueen noted. For the rest of us as observers, it feels "kind of" like an understatement! Much of his work is dark and haunting... Alfred Hitchcock meets the Sex Pistols, but having trained with Givenchy, where he mastered draping, there are also pieces that are as light and fluid as air and water. Equally beautiful is his amazing tailoring, learned in Savile Row that defines and refines form, though it was often hard to imagine it on a human one: 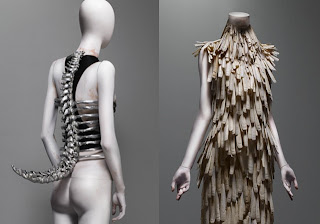 The exhibit and mesmerizing book that was published to commemorate it is best summarized by Andrew Bolten:

"Savage Beauty features the most iconic and radical designs of Alexander McQueen's prolific career. It examines the designer’s evolution from the start of his fledgling label, to his years as creative director at Givenchy in Paris, and finally to the collections of his own world-renowned London house. It reveals how McQueen adapted and combined the fundamentals of Savile Row tailoring, the specialized techniques of haute couture—such as lacework, embroidery, and featherwork—and technological innovation to achieve his distinctive aesthetic. It also focuses on the highly sophisticated narrative structures found in McQueen’s collections and in his extravagant runway presentations, which suggested the most avant-garde installation and performance art".

For those of you in the N.Y. area, Savage Beauty has been extended through August 7th.  It is a must see!  Want to be whisked to the head of the 2 hour line like a V.I.P.???  My friend Linda Levy suggested purchasing a membership (which is tax deductible). Flash and dash...brilliant!  Even the museum is hyping it.  It was worth it's weight in gold.  Leaving the exhibit in a daze, I roamed my favorite halls filled with 19th and 20th century art, ogling my favorite Klimt's, Picasso's Degas', and Gauguin's.  It reawakened how much the Met always sings to my soul...I need this place.

For those of you in far flung places, this YouTube video, will give you a glimpse into the mind, heart and dark soul of McQueen's all too short career.  Deservedly, his art; fabric, lace, wood, metal and feathers stands shoulder to shoulder with all the Master's.