Eylure Lashes; Get an eyeful

Here's the thing about me the kind of chickadee, who wouldn't dream of going to the grocery store without makeup; the opportunity to zhush things up when truly special occasion crop up is limited.

One of the tools that's left in my arsenal, is false lashes. I've tried a bunch, Ardell, which I think hark back to the 60's and have remained a drugstore fixture like Revlon's Cherries in the Snow, ever since, and more recently, Katy Perry's, line from Ulta.  I was excited to receive a pair of mink lashes to review as well...
The trouble was, no matter how I tried to trim and thin them, they still looked like road kill on me, simply a case of too much of a good thing.

I am also not a fan of a full strip of lashes. I could see wearing them if I was appearing on T.V. (Diane Sawyer is never on air without,) but for mere mortal wear, I find them overwhelming.   My method is to cut one lash in half, and apply it to the outer third of my eye, with the longest lashes extending out to the corner. 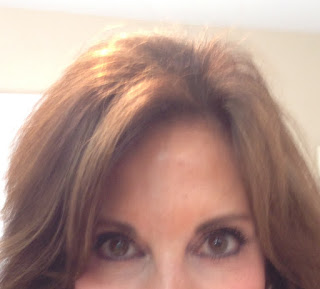 For me, it adds a touch of glamour without making me look, God forbid  like a Kardashian.

I was sent two boxes of Eylure Lashes, an export from the U.K., that debuted in 1947 (available at Ulta, Target and Kohl's) to sample.  They have many lashes to choose from depending on the level of volume, length and drama you are looking to achieve, in strip, pre glued and individual lashes. They are also have products for the brows. Above, I am wearing a half strip of "Enchanted Poise", which is accurately described as a, "short and sweet textured lash for framing the eyes with extra depth".

Eylure's glue is stellar; quick but not too quick drying, ultimately clear and bonding enough so your lashes will stay put, until you are ready to gently peel them off. (Good news for me, having lost a lash in a Cesar salad at a Black Tie event, first mistaking it for an anchovy. I didn't pack the glue in my evening bag, so my only recourse was to strip down to bare lashes..A Diva classic, to be sure.)

Would I ever take a dip in the hair extension pool? No, I think I will draw the enhancement line with my Eylure Lashes, though a dear friend recently described being utterly transformed by them.  Price tag??? $450.

With gentle care, I have also reused them.  Eylure is a first rate, well priced lash, that will be a staple for glam nights out. Oh, and a good blow out of course. The only other unused trick up my sleeve would be an organic spray tan.

And that my Lovelies,  is just a matter of time...