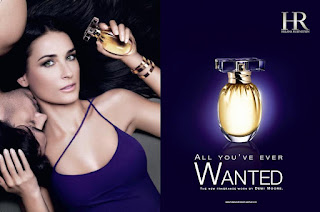 Daring...better than most of her celebrity peers. She shocked the world by posing very pregnant and very naked for Vanity Fair. She rocked the world by defying convention and marrying the delicious, much younger Ashton Kutcher. This is one confident woman.

This week, Vanity Fair and Loreal celebrated the launch of Demi's first fragrance All You've Ever WANTED with Ashton, Zac Posen and a posse of VIP's at the Monkey Bar in N.Y. (I had to take a pass because I couldn't possibly miss the Real Housewives of Atlanta Reunion show)...kidding. It will be available exclusively at Macys on November 5th.

The inspiration is described as, "a contemporary expression of her daring appeal". The scent is described as an, "intense potion", with notes of magnolia, iris-cream and cedar extract and is being brought to the market by Helena Rubinstein.

Not long ago, I saw a fabulous PBS documentary, called, The Powder and the Glory". It described the intense rivalry between the two cosmetic visionaries, Elizabeth Arden and Helena Rubinstein. Make no mistake, Helena Rubinstein was a confident and contemporary woman. I think she would have hand picked Demi to be the muse behind WANTED...and they probably would have become fast friends

I haven't the vaguest clue what magnolia, iris-cream or cedar extract smell like, but this is one celeb fragrance I would be intrigued enough to seek out...I think I will be in good company...don't you???