Things That Go Bump In The Night 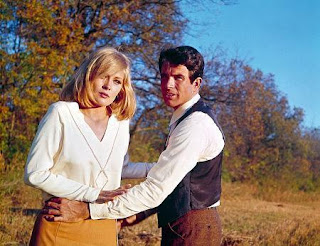 One last hair story, as my email proves that you, my dear readers, think there is definitely a curler loose in my brain. I promise after this last fiasco, I will be going back to basics...pinkie swear.

When I can't sleep, I turn on the T.V. and troll for informercials or a good gangster film...not gratuitously violent dumb ones, but the classics. Films like the Godfather I and II, Goodfellas, Casino, and The Usual Suspects come to mind.

A few weeks ago, I had the great, good fortune of catching Bonnie and Clyde at 3 a.m. Bonnie and Clyde, starred Faye Dunaway and Warren Beatty, at the peak of their beauty. After the release of the film, Faye Dunaway's glamorous Bonnie, influenced fashion with a trend towards berets and slim, languorous, mid-calf skirts. My favorite scenes, featured Bonnie, sans beret, with her gleaming blond page boy, deeply side parted, long bangs and a bump of height at the crown. This is my idea of film hair heaven.

Two nights later, another mid slumber bout of insomnia hit and this time I caught the infomercial for Bump-It's, the easy, revolutionary way, to achieve volume at the crown, with self gripping inserts. Simply choose the color that matches your own, tease, insert the half moon, spiked dog collar to your crown and voila, you too can be Miss Bonnie Jean Parker. I always keep a pen and note paper next on my bedside table, for just such instances as needing to jot down a toll free number, before dawn. I dutifully ordered my Brunette Bump-It kit, the next morning.

It arrived this week. Though I had read several tepid reviews on line, I figured they were all written by one cranky, wispy haired klutz, who couldn't achieve the desired result. Certainly my thick tresses would show no trace of a plastic parenthesis soldered to the top of my head...

Wrong!!! I really had to laugh at my own mad, wishful thinking... A Bump-It, couldn't be covered without detection on a string mop. It hurts, gripping initially and unearthing bits of scalp, but falls out immediately. I next tried to anchor it with bobby pins, achieving my own film moment...Madeline Kahn in Young Frankenstein.

Alas, there is only one thing to do with my Bump-It. Dump-It. With any luck, I'll check my bedside notes...maybe there is a money back guarantee.