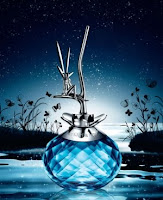 I have a longstanding relationship with three fragrances: Calandre by Paco Rabanne, (spring, 30 years). Christalle by Chanel (summer, 25 years) and First by Van Cleef and Arpels,(winter, 20 years). Newer additions include, Hermes Un Jardin Sur Le Nil, (summer) and Bond #9 Bryant Park, (fall). Everything else I have tried, may smell divine on a friend, or at the fragrance counter, but will end up smelling like muskrat, on me, in a matter of hours.

My bedroom dresser is dressed with far more than five flacons, and hosts many of my failed attempts at finding a new "signature" scent. What do you do with the orphan rejects? Some of the contents look like Johnnie Walker Blue Label at this point, but they remain, dusted weekly, on a mirrored tray.

Fragrance is a touchy thing...I dumped a guy I was dating because he refused to give up his penchant for Geoffrey Beene's Grey Flannel, which had a way of triggering my gag reflex. Come to think of it, maybe he used the olfactory offense, as a ruse to dump me.

I recently opened a scent strip in a magazine for a new fragrance launch by Van Cleef and Arpels, called Feerie. Because of my devotion to First, I opened it and was intrigued... In the weeks to follow, I found it was not available at Sephora and not available at Saks. I did some on line research, and discovered, it is being launched exclusively, with Neiman's and Bergdorf's for the Holidays. Shoot me. Another trip to the Mall.

Feerie means "Fairy" and the perfume stopper hosts an elegant nymph, that looks like a silver Tinkerbell. I have now been burned, way too many times, not to spritz first and leave with a sample. When I was in London last year, Elle, by YSL, had not yet launched in the States. I spritzed it a Harrod's and thought I had found a winner. I picked it up at Duty Free shop at the airport and opened it on board. Maybe the freesia picked up steam in an air compressed cabin, but for the next five hours, me and my fellow passengers,were trapped in a cloud of lychee and jasmine,...Good thing airplanes are equipped with special paper goods, for travel ills, even if they are self inflicted. Now I know, I need at least a 24 hour test period, before handing over my plastic.

The stores are filled with Holiday gift sets. Beautifully boxed, perfume, soap and body lotions trios, that offer a clear value. It's a wonderful gift, providing you know exactly what the recipient actually wears. I'm in my ninth hour of my Feerie test drive and there is no Fairy magic... Another one bites the dust, but at least it is not on my dresser.