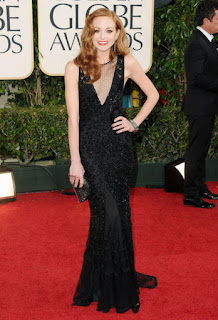 Those of you are regular DivaDebbi readers, know I live for Red Carpet events, specifically the Golden Globes, Emmy's and of course, the big kahuna, the Academy Awards.  As a Personal Shopper, I love to see magnificent gowns, jewels and beautifully styled hair and makeup.  I also relish the missteps...who doesn't???  One of my biggest pet peeves is men on the Red Carpet.  Why can't they just take their seats like gentlemen and get out of the way???  Do I care if you are in Dolce, Armani, Tom Ford or your Bar Mitzvah suit??? No...and admit it, neither do you.

Let's start with my LOVE's.  I haven't the vaguest clue or Jayma Mays is, but I was knocked out by the elegant, modern simplicity of this black Alberta Feretti gown. The Golden Globes are supposed to be a somewhat  low key event.  Overblown looked wrong to me.  Despite being a spectacular gown, beachy hair did not tone down Olivia Wilde's strapless, shimmering Marchesa enough to suit the occasion, particularly since she wasn't even a nominee.  Kudos to: 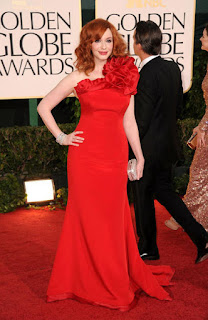 Who am I still on the fence about???  Natalie Portman, pregnant, glowing and usually a fave.  I loved her sixties up do and soft makeup.  I wanted to love the red beaded rose on the blush chiffon Victor & Rolf gown.  One moment I do and the next moment I don't.  I loved Eva Langoria's hair and makeup and 3/4th of her gown.  I saw no need for that enormous train, which overwhelmed her and looked reminiscent of Morticia Adams.  Who else???  Ms. Jolie-Pitt in a long sleeve, strong shouldered, asparagus green sequin Versace Atelier.  Anyone else would have looked like they were starring in a local dinner theatre production.  Angelina did look pretty fabulous.... imagine how spectacular she could have looked, if she remembered to brush her hair.