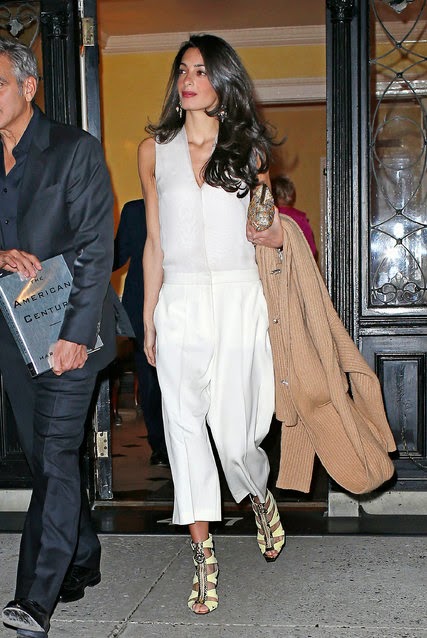 Back in September, George and Amal tied the knot in Italy. The weeks worth of festivities before, during and after the wedding were widely chronicled.  I  wrote about  how besotted I was with her amazing style, grace and range, from short and whimsical to formal and ravishing.

The Clooney's arrived in NYC in February.  George is filming "Money Monster" in Queens and Amal, to the thrill of Columbia's discreet law students, is a guest lecturing.  In the evenings, they have been spotted at NY's hottest restaurants as well as George's old favorites, where he holds court at his usual tables.


It has been reported, that Amal was taken under the wing of none other than Anna Wintour for style guidance, (but obviously was not consulted about her only gaffe; wearing long white gloves to the Oscars.) Could one possibly have a more connected fairy Godmother???  Me thinks not. According to the New York Post. rumors of a Vogue cover were soon sparked after the two were seen lunching at the Lamb's Club last month. The New York Times recently wrote about Amal's ascending star and captured some of her recent outings on this slide show.


I love how unabashedly feminine and polished Amal appears at all time.  I don't think there will be any, "just like the rest of us" photos of Amal appearing in old sweats, Birkentstocks, a crop top and a top knot, sipping on a Starbucks latte any time soon.

Presumably, her well tended tresses are being attended to at the Salon at the Carlyle, where she and George are staying.  What I really want to know is her entire beauty regimen--every last product. How is possible that her hair can be that thick, shiny and lustrous???  Whose lipstick does she favor and how many shades of red does she possess???

I have never been the least bit interested in the dozens of PR pitches I receive each week, describing in detail how to recreate a particular celebs look on the Red Carpet.  What really does that have to do with us? Hence, I pitch those pitches every time.  I also ignore the Times Skin Deep columns that asks stars to recite their beauty must haves, yet here I am, openly pining to peek inside Amal's vanity...