The Real Housewives of Fashion Week 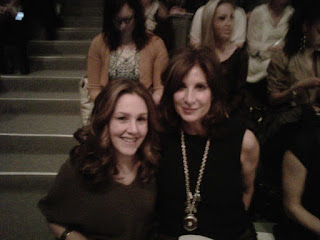 Back to the Tundra...I relaxed poolside on Monday and came home to a fresh "dusting' of snow at night, that I will begrudgingly admit, looked lovely.  I wasn't so cheery this morning when I left the house minus 60 degrees of warmth...Oh well.  I am backtracking a bit and sharing a few tid bits from my adventures at Mercedes-Benz Fashion Week with my friend Linda Levy (above),  whose husband Peter runs the joint for IMG.  Rest assured, there is no better backstage pass for these two Housewives... 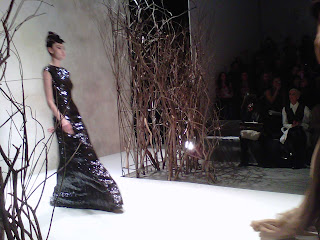 There are three ways to observe shows at Fashion Week.  The first is the absolute best, front row, cheek to cheek with top editors, celebs and socials.  That was our perch for Monique L'Huillier's masterful show, above, which she described as, "Dark, Sultry and Seductive".  Monique chose music that was soothing and refined, in concert with the clothes she showed; lean structured suits, cocktail dresses and gowns with plunging backs made less naked with inserts of lace or sheer panels. It felt a hair somber, but I know when we get to see the entire collection for the Fall Trunk Show at Richards,  there will also be glorious color options. I am already looking forward to it.
The second way to see a show is viewing a "still" presentation, which has been gaining in popularity as Designers seek more intimate (and economical) venues.  Rather than a full out runway show, where themes emerge as several variations of a look are presented, the designers choose only their strongest looks and show about one third of what you would see on the runway.  Since the models are effectively still "mannequins", you do have the benefit of seeing construction and details up close, but you must also jockey for position with the photographers.  This is how we observed both Sachin & Babi and Chris Benz shows.  A plus?  Sometimes the designers are present, greeting editors and friends.  At Chris Benz we spotted Caroline Manzo of The Real Housewives of New Jersey.  Caroline looked lithe, in a black ruched wool dress, with an exposed back zipper. Her hair is now a  flattering, rich auburn and is longer and more sleekly styled, setting off her bright blue eyes beautifully.  She looked lovely and so much more youthful than her first season on RHONJ.  The best anti-aging regimen Ladies???  Zipping La Lip and maintaining  an appropriately thin weight for your  age and body: 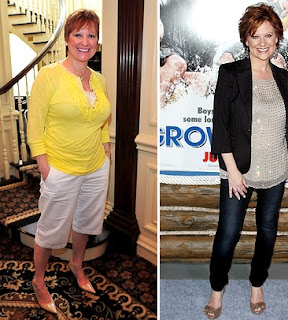 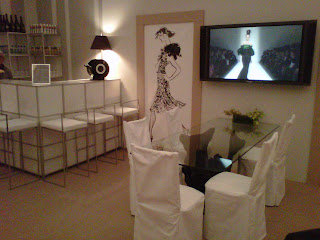 The third way to see a show is on a video loop.  While Linda and I were having lunch in the crisply appointed IMG hospitality suite, we caught up on shows we had missed.  In the past, Designers used to have either their names or logos, etched on to the scrims.so even if you started watching in the middle, you knew instead of guessed whose clothes were being shown.  Now it's more like "Mystery Date", a board game from my youth.  As the house lights come up after the last look, you get to see which designer comes out to take a bow. (In Mystery Date, you either opened a door to a buff "Ken" type, resplendent in white tie or the "Dud", haplessly dressed in high waters with tube socks).  As we sat watching, I tried to imagine who was sending such opulent evening wear down the runway...
The show closed with an elaborate strapless black column with gold embroidery and full train (my Barbie had a similar one, but in emerald satin).   It was not being worn by a model.  This person was slim by mere mortal standards, but not model ones. Another oddity; she was twirling and smiling.  Her hair was coiffed like all the other girls in a high bun that resembled a bowling pin.  She looked very familiar, but still, I could not put my finger on who it was. And then finally, my pistons fired...Zang Toi, the eccentric bad boy with an affinity for kilt wearing, emerged to take a bow.  I remembered that Zang Toi was featured on season two of the Real Housewives of New York City as a friend of Jill Zarin.   Jill Zarin looking radiant, fresh faced and thirty, closed the show. 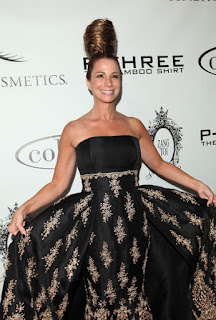 I'm not going to speculate about Jill's good facial fortune.  No doubt her fans and foes will have their fill when season 4 finally debuts. (It was scheduled to begin last night, but they bumped it to premiere the Real Housewives of Miami, while they retool to add some drama, as it allegedly simmered next to a flaming season of the Real Housewives of Beverly Hills).
Lemme just way in this way, "Ill have what she's having"---or had.   Stay tuned!!!
xox,
DD
Posted by DivaDebbi at Tuesday, February 22, 2011