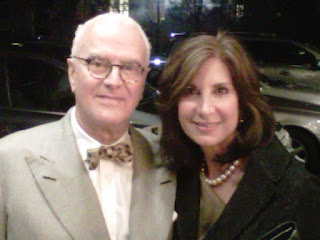 I got a much awaited gift from my Orthopedist last week...the OK to  start wearing heels again, "in moderation,  as tolerated".  Translation as I heard it?   Dust of your Manolo's Honey".  The timing couldn't have been better...Mr. Blahnik himself, was going to be at a cocktail reception at Richards for a book and shoe signing event.  What was I supposed to show up in???   Sketchers??? 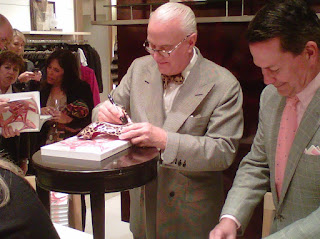 Manolo Blahnik Drawings,  his latest book, is a  luscious feast for the eyes. His whimsical illustrations, in eye popping colors, are literally breathtaking!!! (and a wonderful Holiday gift idea, for any Fashionista on your list).  As the crowds swelled,  he took his time greeting each guest while graciously signing books (and shoes)! After an hour and half, my feet had also swelled, but Mr. B. was still standing serenely. I couldn't help but s glance at what the Maestro himself was wearing on his feet...suffice to say, they were not 4 inch D'Orsay's: 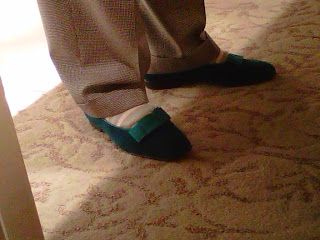 I don't think my Doctor had three night's out in MB's in mind, when she gave me my walking papers.  By the time I was getting dressed (in homage) for a Mad Men finale party,  I was dreading the night ahead.  In a flash I remembered that somewhere, I had stashed a pair of Footpetals Tip Toes, a comfort foot product designed to take the pressure off the ball of the feet.

Footpetals was founded in 2001 by Tina Aldatz, a fashion executive who suffered plenty for the sake of looking good in sexy shoes. Footpetals is "for those of us who have a love/hate relationship with our sexy shoes".   Isn't that everyone?  Nice target market... thus an industry was spawned, devoted to tricking our feet into submission.  Most of the products are made from, "Poron", a high tech, odor resistant cushion like material, that once placed last for the life of the shoe.

After some serious rummaging, I found them and easily applied them on the balls of my shoes.  I gingerly stepped in, not expecting to feel an immediate sense of peace and happiness!   Amazingly, my feet continued to feel just as comfortable through out the entire night!!  In fact, I barely gave them a second thought.

I checked out Footpetals website and they have several other products designed to coddle our feet, which I will definitely be checking out.  Having  been forced to wear flats for two months, (not to mention the Sketcher's word), I begrudgingly admit, I can relate to why Mr. Blahnik was so serene....there is something to be said for comfortable flats...but then again, there is something to be said for Footpetals.   They work!!!