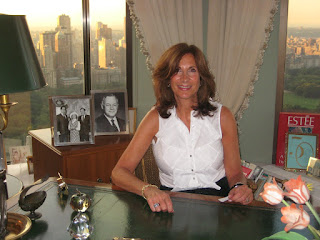 It was thrilling to see the beautiful reception area, site of many special evenings, "Mrs. Estee's" awards "alley", and her lovely, feminine, office, quietly festooned with pictures of family and close friends, (who just happen to be past Presidents)! In this picture, I am seated at her desk... Goosebumps!!!

We all enjoyed hearing from William Lauder, that his grandmother would have loved the blogging community...one more medium to, "tell a woman", and that he imagined, she herself, would have had one!

The cocktail party, also kicked off their October 2008, Breast Cancer Awareness Campaign. We learned this is their 16th year of raising global awareness and funds. Special products from many of Lauder's most glamorous brands, (Bobbi Brown, Clinique, Prescriptives, Aveda, Jo Malone and others) will be sold in October, with proceeds going towards the BCA campaign. In addition, the Company hosts employee-driven fundraising events, fostering a spirit of community amongst the divisions. We were generously provided, a treasure trove of these products in our goody bags and I am already loving Lauder's Perfectionist CP+ Wrinkle, lifting serum, (I could barely contain myself from using it on the train ride home).

I never knew that the Pink Ribbon symbol, was the brainchild of Evelyn Lauder and Alexandra Penny, nor that the Global Landmarks Illumination Initiative, (which illuminates landmark buildings and monuments all over world in October, in glowing pink), was another one of her inspirations. Both efforts, aim to provide awareness and inspire women to be mindful of their breast health.

Separately, The Breast Cancer Research Foundation, founded by Evelyn Lauder, in 1993, supports top research scientists, globally in their quest towards prevention and a cure for breast cancer. In 2007 alone, BCRF donated $32 million dollars, towards achieving this goal!!!

As a breast cancer survivor, I honor the Lauder Families dedication to eradicating this disease. Evelyn Lauder asks, "wouldn't it be incredible to have a world without breast cancer"? Indeed.

My thanks to the Lauder company for a beautiful evening and for their dedication, to making women beautiful and keeping them healthy.