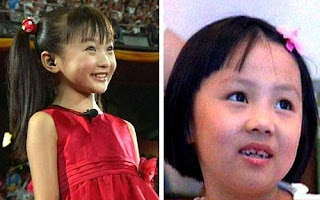 This is shaping up to be a memorable summer Olympics...Lately, there has been a bit of chatter, about the technological tweaks that have given us more spectacular fireworks, in the opening Ceremony (through digital enhancement) and record breaking swim times, possibly from lighter, tighter, swimwear. As far as I am concerned, no harm, no foul.

I take exception, when it comes to crushing little girls souls,, because they are, not deemed pretty enough to represent, "the image of our national music, our national culture", according to Chen Qigang, the Ceremony's Musical Director.

After a grueling competition, 7 year old Yang Peiyi, was awarded the honor of singing, "Hymn to the Motherland", at the opening Ceremonies. During rehearsals, it was determined by committee, that her mainly because of her jumbled teeth, Yang's appearance would be a national disgrace. It was then decided, that 9 year old Lin Miaoke, perfect in pigtails, would lip sync to Yang's vocals. Lin, who went on to become an overnight sensation, was interviewed repeatedly for popular newspapers. Chen Qigang, thought it a perfect solution, "a perfect voice, a perfect image and a perfect show. Perfect???...but what about poor Yang. How publicly, heartbreaking and humiliating for Yang and her family.

Now this is where a some tweaking might not have been such a bad thing, but in the U.S., we are image crazed, but not censorous. Someone might have suggested putting some hair extensions on little Yang and maybe a little bonding on the upper and lowers. Presto chango, problem solved. We are, no doubt, an image conscious country as well, but when it's all said and done, I would like to think, we still have a heart and soul.