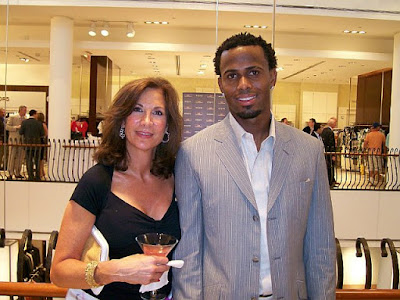 My son is a very cool customer. His calm demeanor, concrete logic and lack of vanity have nothing to do with my gene pool, (though his love of sleeping late, certainly does). He is an athlete, and life revolves around a ball. He observes my hairmakeupclothes obsession with a bemused detachment, but for the life of him, can't fathom why I need to reapply lipstick, to sit on a set of bleachers.

Nothing I have ever accomplished, has ever made a dent on his view of me as anything but a sandwich making chauffeur...until the other day. Tonight, Richards is hosting a fundraiser with the N.Y. Mets, to raise money for the various foundations, their star athlete's support. And I will be there!!! "Really"??? "Yup", I replied coolly. A small smile, a begrudging look of respect...finally, I have arrived, his measure of me, rising a notch.

The whole issue of his being a Met fan has always amused me. His father is a die hard Yankee fan. Most kids simply follow along with their Dad's sport team allegiance. (Yankee fans, tend to be from Westchester, NYC, Brooklyn and the Bronx, Met fans, from Long Island and Queens). His insistence at age 6, to declare undying loyalty to his father's nemesis, was to me adorably independent and to his father, maddening. My bemusement, will no doubt, come back to haunt me, when the kid decides to wed a female Canadian Mountie.

So, I will be attending with a half a dozen Rawling balls to be signed on the "sweet spot". "Do you know where the sweet spot is Mom? "Of course I know where the sweet spot is" I replied indignantly. (Alright, someone will point it out). He is mildly annoyed that I don't know one Carlos from the other and wouldn't have a clue if I was chatting with Johan Santana or David Wright. Jeez, ya think these guys would be in uniform..."Well, polish me up on some stats, so I can talk intelligently with them". My son is visibly paling and wincing at the thought. "Mom, don't even bother talking, just get the balls signed please". Thanks, for the vote of confidence. Anyway, once I pull the crib notes out of my cleavage, the Mets and me will be speaking the universal language...

Here's to a great event and successful fundraiser.