The Sweet Smell of Youth 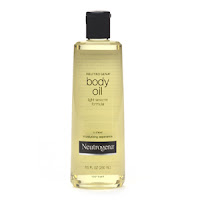 My sister Loren called me recently, from the ubiquitous Duane Reade, N.Y.C.'s equivalent of our suburban CVS. Her body was parched and flaky, what could I recommend for a moisturizer???

I did a mental inventory of some of my past staples, Olay's Quench, Dove's Cream Body Oil, and both Jergen's and Vaseline for Intensive Care's offerings with Alpha Hydroxy infusions; all solid and dependable...But the most effective product I ever used, was one I discovered years ago, when I was a student in Boston. Being from N.Y., it never occurred to me that Boston would be substantially colder...until I caught my first gust, whipping off the Charles River. Within weeks, my skin was scaled, like a striped bass.

I had a posse of "interesting" roommates, Bonnie, my first, was on the Women's Basketball team and grew up on a potato farm in Maine. She studied me the way a Marine Biologist might, a Mermaid...The second was a Militant Millicent, who made it quite clear, that our tenure as roommates, was going to be very short lived. The last was Leesa, who had me totally snookered. Leesa dressed exclusively in Ralph Lauren and wore her waist length hair in a single braid, despite my pleas. She possessed the air of a Long Island, Gold Coast heiress, and dated both sexes from both races. It was my turn to study the Mermaid...

Though I later found out that Leesa, grew up in a modest colonial and dated the usual assortment of jocks in High School, her saving legacy, was to introduce me to a spectacular product, Neutrogena's Sesame Oil. It has it's own heavenly smell, and its surprisingly, sheer formula, glides on the body and instantly absorbs on damp skin.

This, was just the product for my Sis, so she purchased it and promised to report back...Rave reviews, were texted, the next day, so of course, I had to buy it and re live this slice of my youth---(Isn't it interesting how a scent can completely transform you back to another time, place and old boyfriend)???

I am so happy to have this back in my beauty repetoire, particularly with this pre winter, Bean Town snap of cold, we are experiencing. Leesa may have been a phony, but Neutrogena Sesame Oil is the real deal.