I would like to share a few thoughts about Sunday night's 2014 Grammy Awards and some of you may not like them; for starters I was absolutely blown away by how feminine, beautiful, modern, yet regal Taylor Swift looked on the Red Carpet.  This is how to dazzle. Stars, young and old and their stylists, need to take notes.

Everything was perfectly balanced;  her dress hair, makeup and jewelry to create an overall elegance that so often eludes women, who should frankly, know better. It all goes to prove that a woman can look ravishingly beautiful, with nary a boob in sight.

I have never considered myself to be a prude or a feminist, but I didn't quite get the whole Bey/ Jay Z thing. I'm not saying she didn't look incredible, she did, and I think she is a very talented  performer, especially having seen her perform live... But really peeps, this show began at 8:00 pm on network television and there were kiddies watching: 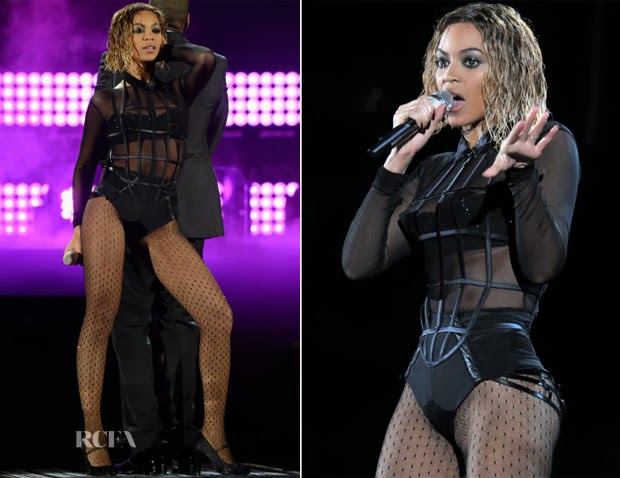 The song she enacted, Drunken Love was both explicit and filthy.  When her husband Jay Z joined her on stage, it created a jarring visual dichotomy.  Why is this man's wife half naked on the stage while he is conservatively dressed in black tie?  What message does this send?

Was this really that much more dignified than Miley's twerking???

I dunno...I just think it would not be so terrible if there was a tad more decorum in the media.

Young women are so incredibly impressionable.  Beyonce, has always been celebrated for her womanly curves, yet here she is rail thin and quite exposed (the back was a thong.)  Her choice, of course, but there is not a lick of airbrushing here and truly, the camera does at 10 lbs. I just wonder if this now creates another ideal of nearly impossible to attain perfection for women to emulate.

As she was performing, I was reading the rave reviews from all the media pundits on my Twitter feed.  It made me feel out of sync and old old fashioned.

Be that as it may, I just wish things were just a little sweeter and everything wasn't so hyper-sexual. I love Pharrell Williams joyous song and video Happy from the Despicable Me 2 soundtrack.  It reminds me of gentler times:


And in some ways, happier ones too.